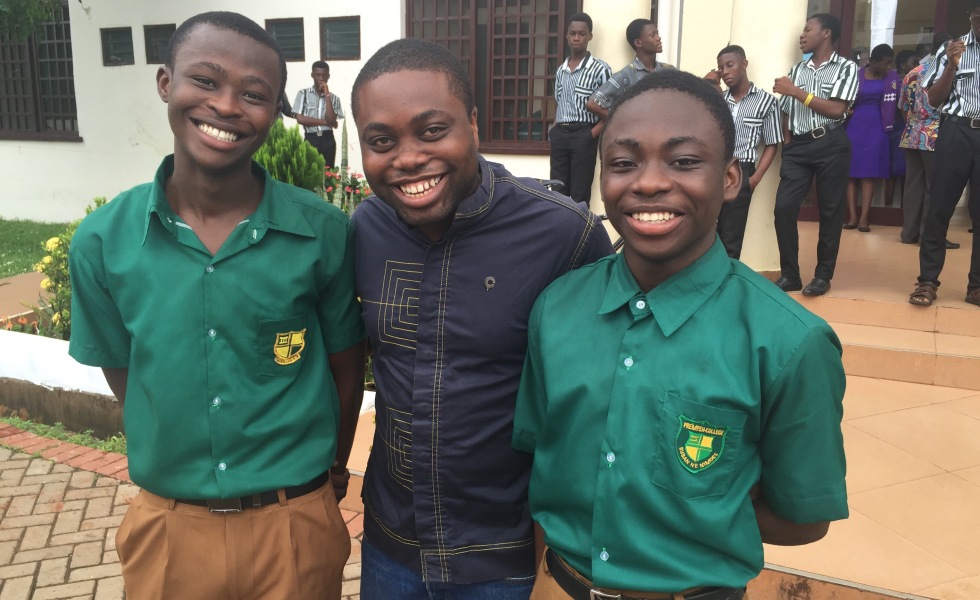 In 1998/1999, my father sent us to spend the holidays with his brother-in-law, who was the assistant headmaster at Prempeh College at the time. We stayed on campus in the Pearson housemaster’s residence. I toured the school on a daily basis with my cousin and fell in love with the surroundings of the school. There was no way I was not going to attend Prempeh College. Even when my English teacher at Morning Star School tried to convince me to attend Presbyterian Boys School at Legon in Accra, popularly called Presec, but I refused. Of course, I remembered that Prempeh College defeated Presec in the 1996 final to win the contest. There was no way I was going to attend a school that was second best in the competition at that time. When I got accepted into Prempeh College, I was placed in the same house as my father and uncle – Aggrey House.

Fast forward to 2015. My interest in the National Science and Maths Quiz was revived thanks to CitiFM and the discussion on Twitter. I began to follow the competition on Twitter via the hashtag #NSMQ and at the competition’s handle – @NSMQ. I made a lot of noise via my Twitter handle – @kaessuman. I did some research and posted some stats from previous competitions. Prempeh College advanced from the round of 1/16 with ease and with the widest gap ever in the competition. The boys then moved into the Quarter-Finals and thrashed their opponents, again with ease. The Semi-Finals was against Accra Academy and Achimota School – two top tier schools in Accra. Again, Prempeh College breezed past these schools with no problem. By this time, Prempeh College’s fiercest rivals, Opoku Ware Secondary School, popularly known as OPUSCO or OWASS or Akatakyie, had crashed out of the competition. Presec had also failed to qualify for the finals.

I was confident of Prempeh College’s chances of winning because per the stats, anytime Prempeh College was in the finals of the National Science and Maths Quiz, they had a 66.66% (now 75%) chance of winning. In fact, I later found out that the lead teacher, who prepared the boys, advised them as follows: “as for winning the competition, I know you will win, but I am worried about the gap. Make sure you increase the gap.” My social media pages were beaming with confidence. Friends sent me private messages that if Prempeh College loses the finals, I should disappear from social media. I called their bluff.

In the car, I advised the boys to enjoy themselves. I told them that Prempeh College had a good winning record in the finals and that once they were in the finals, they would win. I told them that they were about to make history and many Prempeh College old students, popularly called Amanfoo, were solidly behind them. When we arrived at the auditorium, I gave them my business card and asked them to get in touch if they needed anything in future. Many notable Amanfoo, including Tonyi Senayah of Horseman Shoes, James Bomfeh aka Kabila of the Convention People’s Party and a large representation from the Class of 2003, were present to support the boys.

The competition begun with the Quiz Mistress recounting the rich history of Prempeh College’s performance at the National Science and Maths Quiz. Prempeh College led in all the rounds, albeit by a slim margin. The boys were full of confidence and seized every opportunity they had. It was clear that they were destined for a win and ultimate victory. Prempeh College was trending on Twitter and other social media platforms throughout the competition and thereafter. Adisadel College, one of the three finalist, answered the last riddle wrongly, paving the way for a Prempeh College victory.

We had to wait 19 years to win the National Science and Maths Quiz again. It was worth every minute of it. Besides Presec, Prempeh College is the only other school to keep a National Science and Maths Quiz trophy. The excitement of Amanfoo knew no bounds. We cheered in the auditorium and outside the auditorium. We hailed the boys and celebrated them. They had returned pride to the greatest school in Ghana – Prempeh College.

*The author is a barrister; qualified to practise law in England and Wales, New York and Ghana. He is a Global Shaper (Accra Hub) of the World Economic Forum. He may be reached on kow@kaessuman.com.

10 Comments on “Prempeh College – The Greatest School In Ghana”