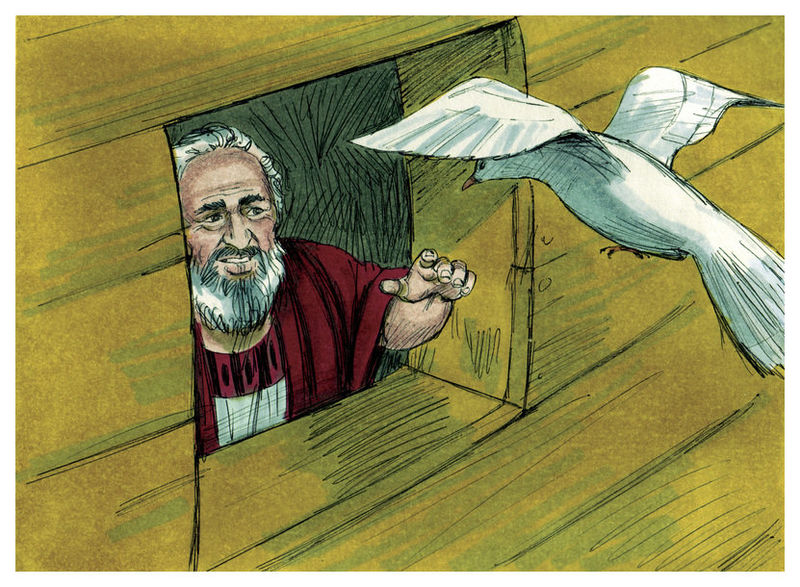 We often rely on our own wisdom or knowledge in doing things or taking decisions. This may be because of an experience we have been through or because of the knowledge we have acquired from education. Our wisdom or knowledge may however prevent us from listening to God and following His instructions. Some may argue that God gave us a “brain” and He expects us to use it and not just turn to Him in everything. Yes, it is true that God has given everyone a “brain” and yes, it is true that He expects us to use it. However, He expects us to use our “brain” in following His instructions and not doing what we want.

The difference between knowledge and wisdom is important. Knowledge is informative; wisdom is directive. Ecclesiastes 10:10 says, ‘Wisdom is profitable to direct’ (KJV). Knowledge gives you information; wisdom tells you what to do with it.

In the story of Noah below, you will notice that Noah had information, through the wisdom of sending the dove out, that the water had receded, that the ground was dry and that he could leave the ark, but he did not act on that knowledge and wisdom but waited for God’s instructions.

We get wisdom from God when we ask Him for it. In James 1:5 (NKJV), the Bible tells us to ask God for wisdom if we lack it and He will give it to us freely. It states

If any of you lacks wisdom, let him ask of God, who gives to all liberally and without reproach, and it will be given to him.

This shows that God is ever ready and ever willing to give wisdom to those who ask for it. But even after we have received the wisdom we ask God for, He expects us to follow His instructions.

Wisdom is very important to God’s children, to be able to apply the knowledge He has given to us. But it is also important for us to get understanding. Proverbs 4:7 (NKJV) states

Wisdom is the principal thing; Therefore get wisdom. And in all your getting, get understanding.

Trust in the Lord with all your heart, and lean not on your own understanding; in all your ways acknowledge Him, and He shall direct your paths.

These verses confirm that God has given us our “own understanding” but He expects us not to lean on it but to acknowledge Him so that He can direct our paths. When God directs your path, there is no failure.

These verses and the reason why we are expected to follow God’s instructions even though He has given us wisdom and understanding, come to life in the story of Noah below. It is important that I set out Genesis 8:1-19 (NKJV) in its entirety for you to appreciate the lesson to be learned.

Then God remembered Noah, and every living thing, and all the animals that were with him in the ark. And God made a wind to pass over the earth, and the waters subsided. The fountains of the deep and the windows of heaven were also stopped, and the rain from heaven was restrained. And the waters receded continually from the earth. At the end of the hundred and fifty days the waters decreased. Then the ark rested in the seventh month, the seventeenth day of the month, on the mountains of Ararat. And the waters decreased continually until the tenth month. In the tenth month, on the first day of the month, the tops of the mountains were seen. So it came to pass, at the end of forty days, that Noah opened the window of the ark which he had made. Then he sent out a raven, which kept going to and fro until the waters had dried up from the earth. He also sent out from himself a dove, to see if the waters had receded from the face of the ground. But the dove found no resting place for the sole of her foot, and she returned into the ark to him, for the waters were on the face of the whole earth. So he put out his hand and took her, and drew her into the ark to himself. And he waited yet another seven days, and again he sent the dove out from the ark. Then the dove came to him in the evening, and behold, a freshly plucked olive leaf was in her mouth; and Noah knew that the waters had receded from the earth. So he waited yet another seven days and sent out the dove, which did not return again to him anymore. And it came to pass in the six hundred and first year, in the first month, the first day of the month, that the waters were dried up from the earth; and Noah removed the covering of the ark and looked, and indeed the surface of the ground was dry. And in the second month, on the twenty-seventh day of the month, the earth was dried. Then God spoke to Noah, saying, “Go out of the ark, you and your wife, and your sons and your sons’ wives with you. Bring out with you every living thing of all flesh that is with you: birds and cattle and every creeping thing that creeps on the earth, so that they may abound on the earth, and be fruitful and multiply on the earth.” So Noah went out, and his sons and his wife and his sons’ wives with him. Every animal, every creeping thing, every bird, and whatever creeps on the earth, according to their families, went out of the ark.

Firstly, after 40 days, he opened the window of the ark and sent out a raven, which flew to and fro until the waters dried up. We are not told that the raven returned to the ark. Noah also sent a dove to see if the waters had receded from the face of the ground. Unlike the raven, we are told that the dove came back because she did not find a resting place for her feet. This informed Noah that it was not ready to get out of the ark. So he continued to wait.

Secondly, after 7 days, he sent the dove out of the ark again and this time, she returned in the evening with a freshly plucked olive leaf in her mouth. The Bible tells us that by this act, “Noah knew that the waters had receded from the earth.” But he still did not leave the ark; he continued to wait. In other words, Noah had knowledge that there was no water on the earth but he applied his wisdom and remained in the ark for God to instruct him that it was alright to leave.

Thirdly, he waited for another 7 days and sent the dove out of the ark again. This time, the dove did not return. By this time, it was obvious that Noah and his family and all the animals could leave the ark but they did not. They continued to wait.

Fourthly, the Bible tells us that in the six hundred and first year, in the first month, the first day of the month, the waters were dried up from the earth and that Noah removed the covering of the ark and looked, and indeed the surface of the ground was dry. Noah and his family and all the animals could leave the ark to the dry ground but they remained in the ark. They continued to wait even though it was obvious that it was time to leave the ark.

Fifthly, in the second month, on the twenty-seventh day of the month, the earth was dried. Noah still remained in the ark. It is important to note that all throughout this period, there was no rebellion from Noah’s family about leaving the ark since the earth was dried up. They were all waiting for Noah’s move just as Noah was waiting for God’s instruction. Without Noah’s move, they did not move and without God’s instruction, Noah would not move.

And then we are told that God spoke to Noah and instructed him to take everyone and everything out of the ark. It was only after God’s instruction to Noah that he went out of the ark with his family and all the animals that were in the ark.

Glory be to God in the Highest! God bless you!

The author is a barrister; qualified to practise law in England and Wales, New York and Ghana; a Global Shaper (Accra Hub) of the World Economic Forum and a firm believer in the gospel of Jesus Christ.